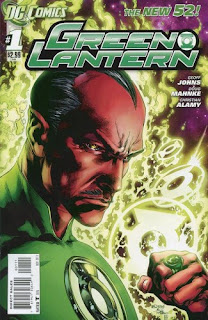 Nice cover shot to start the series with, even if it does deliver a healthy dose of WTF? by featuring Sinestro instead of Hal. Looks like he’s the main character of this particular series, even if it’s just for this story arc. It’s a very iconic Sinestro look, full of power and purpose.


Sinestro is forced to wear the Green Lantern ring again and, much to his outrage, finds his homeworld of Korugar enslaved by the Yellow Lanterns he once led. Hal Jordan has been banished from the Green Lantern Corps and is having a difficult time adapting to civilian life back on Earth. When it seems life just can’t get any worse, he receives the surprise of his life: Sinestro, as a Green Lantern, appears at his apartment, informing Hal that if he wants to get his ring back, he’ll do everything Sinestro says.

I think the overarching hook for this issue is how much this is about Sinestro, despite traditional expectations about Green Lantern being about Hal Jordan. Hal’s featured in it--prominently--but it is Sinestro is driving the plot and how his actions are what keep things moving. He’s the Green Lantern. He’s made to take the vow,against his will. He’s the one that needs to take down the Yellow Lanterns on Korugar. He’s the one who enlists a disgraced and de-ringed Hal’s help in doing so.

Yes, Hal’s life sucks without the ring, and hopefully he’ll get it back soon, but for now, this is Sinestro’s story. Hal is just along for the ride.

Art-wise, Doug Mahnke’s pencils are a study in emotional contrast for me. Some of his work I love and think is wonderful, and some of it I can’t stand. His aliens--even the near-humans like Sinestro and the Guardians of Oa--generally look great, but it’s his humans, I’ve noticed, that look a bit off. Carol Ferris looks like she lacks vital detail, while Hal in places looks a little too detailed. Creepy, even, in the amount of detail we can see in his face.

Overall, I’m liking the story, particularly the change in protagonists. It’ll be interesting to see what Sinestro has Hal do in order to get the ring back, or even if the offer’s as on the level as it seems. I’m certainly eager to see more, and will be reading more as I’m able. Highly recommended. 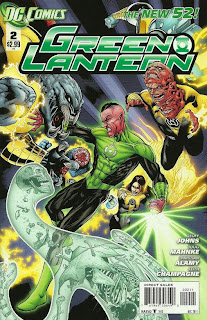 This cover, like the story arc title, reinforces the point that, for the time being at least, Hal Jordan is not the star here. It’s not completely accurate--Sinestro doesn’t fight any of these Yellow Lanterns, and the one he does is not pictured--but it is a good action shot indicative of what’s likely to come.

Sinestro offers Hal a chance to wear the Green Lantern ring again, but Hal Jordan, being Hal Jordan, either impulsively attacks Sinestro with it or jumps immediately back into the role of the superhero, failing to listen to Sinestro’s terms. Once Sinestro makes it clear that Hal is very much under his control for the time being, they briefly square off against Gorgor, a Yellow Lantern. Once Sinestro kills him, he tells Hal that his mission is to aid Sinestro in re-taking Korugar from the Yellow Lanterns.

I’m sorry, but I personally think it’s hilarious to watch Hal Jordan get bitch-slapped around constantly by Sinestro, largely due to his own inability to think things through. Attack the guy who gives you a weapon? Really? Ignore the instructions of the same guy, after he’s already demonstrated his superiority? I think the fact that it takes the whole issue for Sinestro to explain why he’s given Hal a ring rests squarely on the fact that Hal seems to have the attention span of a fruit fly. At this point, he clearly needs Sinestro, and he needs to drop the superiority complex.

Mahnke’s pencils seem to be getting better for me in this issue. It’s possibly because we’re seeing less of Hal in civilian duds and no mask. When he’s masked, he looks great. When he’s civilian, I still feel like there’s too much facial detail, particularly around his eyes. Sinestro looks great, and most of the civilians look fine. Loved the scene on the bridge and the battle following it. Clearly Mahnke can do action just fine.

Overall, things are progressing nicely. There’s advancement of the plot, which is a little slow overall, but peppered with amusing and intriguing character developments and interactions. It’ll be neat to see this two go to Korugar and throw down together. Highly recommended. 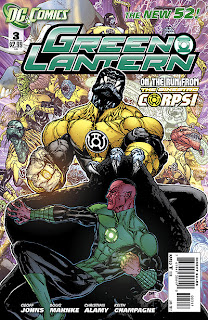 Sinestro, hiding from the Yellow Lanterns--I’m sorry, the Sinestro Corps--makes for a nice, suspenseful cover. The phrase is slightly misleading, as he’s not on the run from them; quite the opposite in fact, he’s coming after them. But it does point up the coming conflict nevertheless.

Hal begrudgingly agrees to help Sinestro liberate Korugar from the Sinestro Corps, after being told that he gets to keep the ring Sinestro made for him. Going over their battle plan, Sinestro reveals that Hal is to take Sinestro’s green lantern into the Yellow Lantern battery once he’s distracted the Corps. Of course, circumstances mess up the timing of the mission for both men, and Sinestro ends up hopelessly surrounded by Yellow Lanterns while we see Hal, green lantern in hand, getting disintegrated by the Yellow Lantern battery, cursing Sinestro’s name.

Oh, and the Guardians are apparently going to try to replace the Green Lantern Corps.

This issue points up a lot of the mistakes Sinestro has made in his decision to let the Sinestro Corp take over Korugar. His distaste at being a Green Lantern again is plain, particularly the notion that he set up a destruction plan for the Sinestro Corp that would require one. Then there is how scared his own people are of him, in spite of his attempts to free them--clearly they blame him as much as the Sinestro Corps for their current misfortunes. Despite his pretensions to superiority over Hal, he’s still as capable of miscalculations and mistakes as the next person.

The artwork really shines here, as Mahnke gives us plenty of shots of Korugar, the Guardians, Hal and Sinestro in outer space, and various grotesque species that make up the Sinestro Corps. I particularly like the way Hal and Sinestro look when they’re facing each other and Sinestro is saying that he is better than Hal. In that moment, Sinestro looks like some kind of silly comedian grandstanding against a stage rival. Very entertaining.

Overall, I’m eager to see where this goes. We’re on Korugar now, and it looks like Hal’s just gotten pulled apart and killed. While I doubt this is the case, things are nevertheless looking pretty grim for our heroes. Highly recommended. 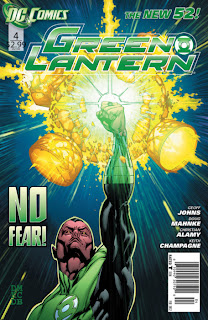 Nice cover this month. Sinestro shatters the yellow battery, his ring shining in front of the explosion. While I like the fact that he’s clearly the star here, it is a little weird that Hal has yet to even appear on a single cover by this point, especially given how prominently he’s been featured.

The plan to liberate Korugar falls apart swiftly, as both Hal and the lantern are ejected from the yellow battery with all due speed. Having captured Sinestro by sheer overwhelming numbers, the Sinestro Corps is torture and then imprison him while they try to figure out how to get the Green Lantern ring off of him. Hal, imprisoned next to Sinestro and his people, convinces him to create many rings to bestow on his people so they can fight back against the Sinestro Corps. But they are still so overcome with rage at his arrival, that they immediately turn their newfound strength back upon Sinestro.

What’s interesting about this issue is the relationships Sinestro has with the people he’s interacted with in his life. The Corps he created, while obviously relishing in his pain, are still trying, in their twisted way, to save their leader. His people, on the other hand, have taken their misfortunes seriously and have a long way to go before they’ll forgive him for causing them such pain. Even Hal, who has never liked Sinestro, seems sympathetic to his desire to make amends.

The art in this issue is good. It isn’t just that it’s mostly aliens and masked men Mahnke is drawing. His humans, Hal in particular, are looking better. He does sometimes seem inconsistent about how far down his face his nose should be, but its only occasionally noticeable. All in all, I’m enjoying the illustrations as they support the narrative.

Overall, I think I’m ready for this arc to wrap up. It’s been good, and I think it’ll end well in the next issue or so. It certainly looks like we’ve got all the elements in place for an endgame: Hal and Sinestro on Korugar, in an unenviable situation, with Sinestro’s own people wanting him dead. We’ll see how it all plays out. Highly recommended. 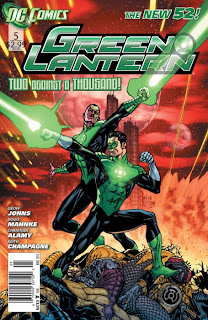 Alright, now this is a fun cover! Sinestro and Hal, rings ablaze, fight together while standing atop the bodies of the Sinestro Corps. While I’ve enjoyed Hal’s second string status for this arc, it is good to see him on the cover again.


When their attack on Sinestro fails, the Korugarians begrudgingly agree to turn their rings on the Sinestro Corps. While they distract them, Sinestro and Hal journey back to the Yellow Lantern battery and being siphoning its energy off into Sinestro’s green lantern, shutting down the Sinestro Corps’s rings. Despite his heroism, his people banish him from Korugar, and he sends Hal back to Earth with a powerless ring. Hal resolves to make things work with Carol, and the Guardians, seeing Sinestro return with the yellow battery in hand, decide the time to replace the Green Lantern Corps is finally upon them.

This feels like a good way to end the story arc. We see Sinestro briefly exercise his mastery of cold-blooded manipulation as he gives Arsona the will to wield the Green Lantern ring he created. Sinestro may have accomplished his goals, but redemption is far from at hand, as his people say they’ll never forget his misdeeds. His dismissal of Hal was amusing, serving to reinforce Hal’s hatred of Sinestro while he technically honors the letter of their bargain. Chances are that they’ll have plenty to hash out during their next go-round with one another.

Overall, I liked this story quite a bit. It shows its protagonist Sinestro taking an unenviable situation and using his wits and resourcefulness to make the best of it. While it’s a little disappointing to see Hal with no ring (effectively) at the end of this story, it’s not really surprising. Of course, we’re set up with the subplot of the Guardians, which will likely factor into both men’s lives soon. Highly recommended.
Posted by Unknown at 6:10 PM

Sites On Which I'm Active